The tears of a young witch have been turned by a demon into a key that opens up a gateway for the evil in this world. The King Alfonso VI of León has gathered his loyal knights to get to Tolomera del Rey and finish the nightmare using the power of the Witch’s tears. Banish the zombies and demons that entered the Kingdom of Castile with Don Ramiro, the loyal King’s Knight, and his friends. For that, you will use a different range of weapons to defeat your enemies through the cursed lands of Tolomera, in a pure classic arcade action style. Explore Tolomera del Rey in depth thanks to brand new game stages and fight against new final bosses and enemies. Also, you will become a seasoned monster hunter with the new illustrated bestiary with unlockable information about the legends featured in the game. Brag about your combat skills with 15 new unlockable achievements and yell your battle cry with new songs for the original soundtrack and the remastered audio. 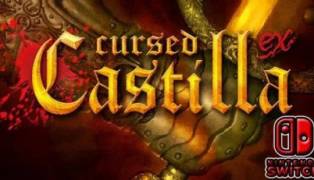 Cursed Castilla (Maldita Castilla EX) is an arcade action platformer full of creatures from medieval myths from Spain and the rest of Europe, as well as from chivalric romances. This game is an extended version of the renowned classic arcade Maldita Castilla, originally created by the indie Locomalito.