A new saga begins. After narrowly escaping an attack on their village, JD Fenix and his friends, Kait and Del, must rescue the ones they love and discover the source of a monstrous new enemy. Engage in a two-player co-op campaign with friends locally via split-screen, over Xbox Live or LAN. Player 2 can select either Kait or Del. Team up with four others and battle wave after wave of increasingly difficult enemies by choosing your combat class, leveling up your skills and deploying fortifications anywhere on the map. Compete online in new and favorite game types, all at 60fps on dedicated servers. A new visible ranking system means fairer matchmaking for social, competitive and professional players alike. 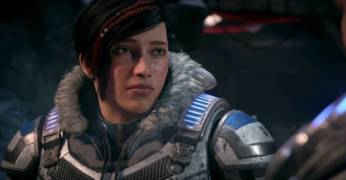 Gears 5 is an upcoming third-person shooter video game being developed by The Coalition that will be published by Xbox Game Studios for Microsoft Windows and Xbox One as part of Xbox Play Anywhere.