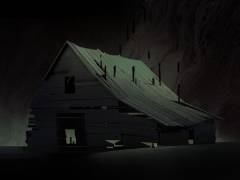 Overland is a new 3D survival tactics game from the creator of Canabalt. In Overland, players guide an evolving cast of survivors on a road trip through a ruined continent. To survive the trip, players scavenge for fuel, weapons, and other supplies to help them keep moving and protect themselves from the strange, sound-sensitive creatures roaming the remains of North America. Encounters in Overland are randomly generated. No two situations are ever the same. Players need to keep an eye out for dangerous surprises, unexpected outcomes, and hidden rewards. Should you save up fuel for that long detour up ahead? You can find solid upgrades there, but stockpiling gasoline is a risky maneuver. What do you do when there's only one seat left in the vehicle? Do you take a healthy passenger with no particularly useful profession? Or do you try to save the wounded specialist? Maybe there's a medkit at the next stop. Maybe there isn't. Overland is divided into Encounters, which take place on the tactical grid, and Interludes, which usually take place around a campfire or some other rest area. During Encounters, players have access to a variety of personal and contextual actions, including basic commands like movement and scavenging, as well as more specific things, like lighting torches or driving the car. During Interludes, players make higher-level strategic decisions: how much fuel do I have left? What resources do I need most? What level should I go to next? Making the right calls on both a tactical and strategic level is the key to survival.