Destiny is developed by Activision and published by Bungie. The release date for Destiny is 2014-09-09. Destiny is playable on XBox One, PS4, PS3, XBox 360.

Average Rating 0 based on 0 ratings.

Destiny 2: Where Is Xur Today? Location and Items for February 13

Destiny 2: Where Is Xur Today? Location and Items for February 12

Destiny 2: Where Is Xur Today? Location and Items for February 11

Derick Tsai has over 15 years of experience across the games, animation, and film industries,

Sony Wants to Help Bungie Turn Its Franchises Into Movies

Sony says that Bungie wants to turn its games into multimedia franchises – and the PlayStation creator says that it could help the developer make movies.

A leaked ad has shown off some of the Destiny 2 The Witch Queen exotics that's set to come this February 22, 2022.

The video game industry reacts to the news that Sony is acquiring Bungie, the creators of Destiny and Halo, with takes ranging from optimistic to cautious.

Destiny studio will remain multiplatform, able "to self-publish and reach players wherever they choose to play"

Destiny 2's Story So Far (Until The Witch Queen)

With the Witch Queen launching soon it is time to recap the story of Destiny 2 campaigns, raids, and seasons.

In a lot of ways, Destiny is like No Mans Sky. The original game was a fraction of what people expected, with memories of bad choices and poor scheduling

A wholesome Destiny 2 clip shows a group of players sacrificing themselves to give an automatic victory to an outnumbered opponent.

Destiny 2 Grasp Of Avarice Dungeon Guide - How To Start, Beat Every Encounter, And Find All Lore

We've uncovered everything in the Grasp of Avarice dungeon to help you find your way to riches.

CG writes: We take a look at the recently released Bungie 30th Anniversary Pack for Destiny 2. Strange trader XUR gets more of a look-in with his own gameshow type DLC content. Check out the Destiny 2..

Destiny 2 The Witch Queen trailer debuts at The Game Awards 2021, showing off the expansion's first mission and the Hive Knight with the Light

How to Complete Magnum Opus and Get Forerunner in Destiny 2

A guide for how to complete the Magnum Opus questline and claim the Halo-inspired Sidearm Forerunner in Destiny 2.

One of Destiny's most recognizable weapons is getting its own real-life Nerf overhaul.

Bungie has revealed the Destiny 2 30th Anniversary trailer, showcasing everything new with this latest big update for the game.

Destiny 2 Is Getting Halo-Themed Weapons for Bungie's 30th Anniversary

Halo-themed weapons based on items like the Energy Sword and Battle Rifle are coming to Destiny 2 as part of the 30th Anniversary.

Fight destiny itself in Justice Chronicles

Richard writes: "The KEMCO RPG machine has churned out another one just in time for the festive season. Having been available on mobile and the Nintendo 3DS, it has now been ported over to more modern..

Rumor: Destiny 2 30th Anniversary Event Will Have a Halo Crossover According to New Images

Eagle-eyed players believe that they have spotted Halo weapons for the Destiny 2 30th Anniversary event next week.

IGN : Welcome to IGN Unfiltered, our (somewhat) regularly occurring interview series where we sit down with the best, brightest, and most fascinating minds in the video game industry. (Catch up on the..

Former Bungie composer Marty O'Donnell has told fans to stop sharing, remove and 'destroy' any non-commercially available material that they may have in their possession related to Destiny or Music of..

Bungie has angered fans by announcing that new dungeons coming with the upcoming Witch Queen expansion will only be available as standalone purchases, or as part of Deluxe Editions.

Inside the Always-Escalating War Against Gaming Cheaters

The war against cheaters is leveling up as top games like Call of Duty: Warzone, Valorant, Destiny 2, and more are stepping up anti-cheat measures.

Where Is Xur in 'Desitiny 2': Location and Inventory Revealed

Xur, "Destiny 2's" travelling merchant, moves to a new position every Friday and refreshes his inventory. Read here to learn where he can be found this week.

Destiny 2 Will Lose The Forsaken Expansion to the Vault

Bungie has announced that the Destiny 2 Forsaken campaign will enter the Destiny Content Vault early next year.

Coming Soon to Xbox Game Pass: Back 4 Blood, Destiny 2: Beyond Light for PC, and More

Xbox Wire: "Welcome back to your monthly Xbox Game Pass update! We have several great games to add to your ever-growing play list, like Final Fantasy XIII, The Artful Escape, and more. Apologies to th..

The team at Bungie announce their new Accessibility team and discuss upcoming accessibility features in Destiny 2, such as auto-fire.

Where is Xur in "Destiny 2" this week? Location and shop items for September 24

Xur has changed location once again in "Destiny 2" and is selling brand new exotic items. Here is where you need to go to find the travelling merchant this week.

343 Industries has an area on one of its Big Team Battle matches that is both a cool gameplay idea and seemingly a quiet nod to Destiny.

Bungie has added matchmaking assistance to Destiny 2's Trials of Osiris mode to make it more welcoming for a wider range of players, but it hasn't launched without its own fair share of controversy.

Former Bungie composer Marty O'Donnell has been found in contempt of court over his use of Destiny music assets that broke the terms of a 2015 lawsuit between him and Bungie.

The new revamped Trials of Osiris has proven successful, as it's already Destiny 2's most populated weekend ever.

"Dice Legacy takes tabletop games in digital form to a whole new level. It uses dice-based mechanics to gather resources, defend your settlement, and expand into the unknown while also being a challen..

Bungie Is Hiring to Turn Destiny Into TV Shows, Movies, and More

Bungie is hiring for a new senior executive position who will help to bring Destiny's narrative across to the world of TV, film, and more.

Destiny 2 Stasis weapons: Tier List &amp; Where to get them

This guide covers every Stasis weapon currently available in Destiny 2, including the all the Legendaries (with their god rolls) and Exotics for PVE/PVP.

Bungie has announced the Destiny 2 The Witch Queen different editions that will be available, as well as the Bungie 30th Anniversary event plans & bundle.

Bungie has announced the Destiny 2 The Witch Queen release date, and it's set for February 22, 2022! Watch the reveal trailer now.

Best Destiny 2 Moon weapons Tier list &amp; How to get them

This Destiny 2 Moon weapons tier list features every reissued Moon weapon, where to find them, and their daily rotation.

This Destiny 2 Auto rifles tier list features every auto rifle currently in the game, including the best Legendaries (with their god rolls) and Exotics for PVE/PVP.

Just Geek wants to please Destiny 2 fans once again. This time they bring us Fallen Baby plushies that radiate cuteness.

New Destiny 2 PvP modes and maps will be coming in Seasons 16 and 17, and Bungie has even more ambitious plans for the future beyond that.

This Destiny 2 Lost Sectors guide features every Legend and Master Lost Sector, their rotation schedule, and the shields and champions information.

Are you new to Destiny 2 or a returning player? This Destiny 2 Beginner's guide includes everything you need, including tips, tricks, and essential tools. 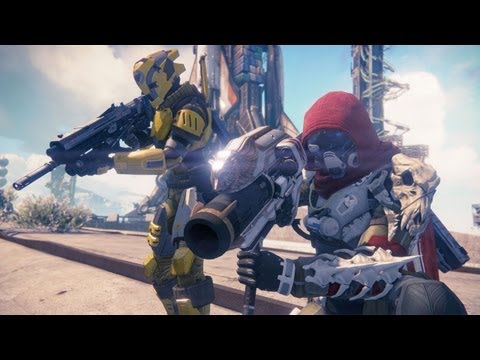